WBI Foods in Indonesia has found a fortune with sales of its RTC duck. Rachmad Novyardi speaks with ARIEF FACHRUDIN about the growing interest in this newfound protein that is convenient to consume.

“It’s beyond our expectations. Our central kitchen is now running at full capacity. We can’t even meet demand,” said Rachmad Novyardi, General Manager of the East Java integrated duck company.

“Because of widespread social restrictions, people have been choosing easy-to-serve food. They also want alternatives to chicken meat and beef, so duck meat is an option. We are lucky that we invested in RTC duck production two years ago. Now we are reaping the rewards.”

The surging demand for WBI’s RTC ducks comes both from online and offline markets. It has been working with Japfa’s Bestmeat to distribute products nationally. Bestmeat has hundreds of meat shops as well as official accounts on popular e-commerce platforms.

WBI also has partnerships with many resellers. “These resellers work in their own communities to market our products. They also sell via social media and e-commerce,” Mr Novyardi told Asian Agribiz.

“We have received many good reviews from e-commerce. The point is that consumers like the taste of our RTC duck and the price is affordable for them. The good reviews are important to attract new customers.”

Mr Novyardi is optimistic that the RTC and RTE duck category in Indonesia will continue to grow. “Year after year, I have been watching this category grow. And this year the growth will be 100% or higher because of the pandemic,” he said.

“The pandemic has shown duck companies that consumer habits have changed. Now they are accustomed to online shopping and RTC & RTE food. Post-pandemic, I believe this new habit will persist,” he said. 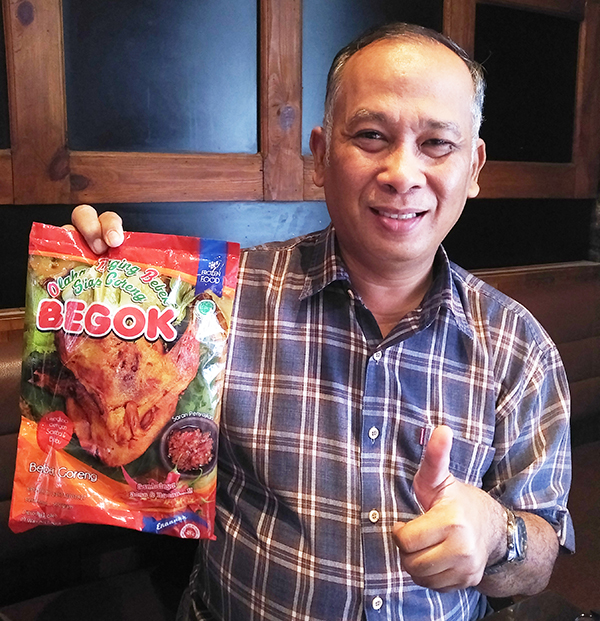 Last year, WBI launched fried duck and grilled duck under the Begok brand. Available in 500g packs, these whole ducks come with a sauce and seasoning, and are sold at USD 3.56/pack.

Because some consumers prefer breast or thigh meat only, the company recently modified two of its lines into a portioned-cut version. These are priced around USD 1.08-1.15, with packs containing four cuts of breast or thigh. “This portioned-cut version aims to target the middle class and above. They love that specific part of duck carcass and they want to pay more for it,” said Mr Novyardi.

WBI also recently launched an RTC portioned-cut variant for the economy segment. The portioned cut’s size is smaller and priced at USD 0.54. A pack contains a mixture of breasts, thighs and wings in six portioned cuts. “We are targeting food stalls and mid-class restaurants that want to sell duck dishes, but are limited by budget and cooking time. We have a solution for them,” he said.

“We want to target all market segments with all our lines. We want all people to be able to eat delicious duck meat at an affordable price,” said Mr Novyardi.

All WBI’s RTC duck lines are produced at a central kitchen in East Java. It uses cutters to cut carcasses into portioned cuts, tumblers to marinate the meat, vacuum packaging machines and metal detectors.

In terms of food safety, WBI regularly sends meat samples for testing at external labs. And it is now upgrading its facility’s quality control and assurance standards.

The company is considering setting up a new central kitchen as sales continue to increase. “I would prefer the new facility to be located in a different province, to support market penetration and for quick delivery,” said Mr Novyardi.