Since last June, the country has been suffering from some of the worst locust swarms that it has seen in the last 25 years. With 38% of its land area seen as fertile breeding ground for the desert locust, according to the FAO, cereal crops are under threat from swarms of up to 40 million insects at a time.

The government has been engaging in aerial and ground pesticide spraying, though this can cause damage to the ecosystem and affect human and animal health.

Seeking an alternative, Muhammad Khurshid, an official from the Ministry of Food Security and Research, and Johar Ali, a biotechnologist attached to the Pakistan Agriculture Research Council, have raised the idea of catching locusts to produce insect meal.

Dr Ali told Asian Feed Magazine that the pair had been inspired by seeing people catching locusts and eating them in Oman.

“This is not culturally appropriate for us, so the next best thing would be to feed them elsewhere.” However they needed to catch the insects before they are sprayed with pesticide.

Having studied locust migration patterns, the scientists knew the insects would arrive in Pakistan from Iran or China and would first settle on the ground to rest and breed. “This was the best time to catch them; people can easily pick them off the ground,” explained Dr Ali.

In the meantime, his research into the nutrient composition of locusts showed that 70% of their dry body weight is protein. This compares to just 45% in soybean meal, which is extensively used in poultry feed.

“We thought that if we could use locust meal in place of soybean, we would not only save USD 2 billion annually, but also provide local villages with gainful employment,” said Dr Ali.

A pilot project began in the Punjab district of Okara and was met with success as farmers stepped up to catch the locusts at night. In return, the researchers offered to pay USD 0.09- 0.12 for each kilo of live locusts caught, under the condition that no chemical spray was used to catch them. Farmers working in shifts of 6-7 hours have been able to capture close to 1000 kg of locusts, earning USD 121 in the process.

Turning a profit from disaster

The researchers have also engaged animal feed producers such as Hi-Tech Group to assess the locusts in their poultry formulations. Hi-Tech has stated that it is satisfied with the results, as long as locusts are caught without pesticides.

Feed producers’ enthusiasm also comes from the 20-30% cost saving. A kilo of raw material from locust costs USD 0.12 compared to USD 0.52 for soybean. Calculations have also shown that replacing soybean meal with locust can lower the cost of fish feed by up to USD 12.20 per 50kg bag and by USD 9.15-9.76 for poultry feed.

Drying and grinding the locusts would only increase production costs by USD 0.06, still making the insect meal much cheaper than soybean.

Dr Ali has also been able to map out the amino acid profile of locust protein, making it easier for feedmillers to use the insect meal to formulate their feed.

When no oil is used in the formula, he advises feedmillers to pass the locusts through an extruder to reduce dust during milling.

“It is easier for poultry to eat once it is passed through the extruder,” he said. Since the structure of locusts is light, they also make an ideal floating fish feed.

Dr Ali and Mr Khurshid have invited the private sector to step in to produce locust meal commercially. 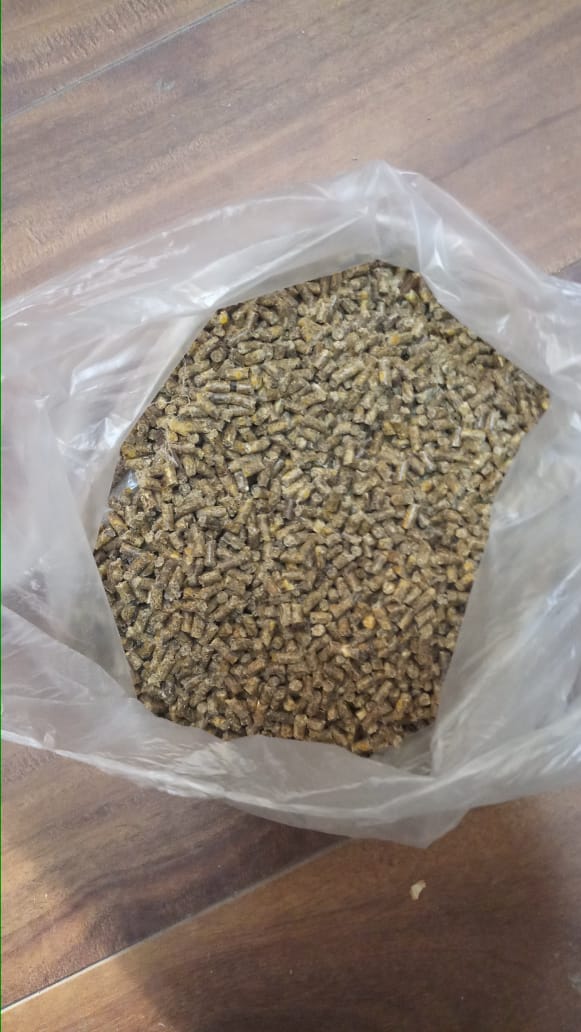 The government has also shown enthusiastic support for the project, with Prime Minister Imran Khan promising to expand the pilot project to the whole of Punjab province. India, which also suffers from locust attacks, aims to carry out similar pilot projects.

Moving further, Dr Ali is seeking funding to study the gut microbiome of locusts. “We are interested in finding out how they can convert their food into such high-quality protein. Once we understand this, we can replicate the process artificially in a lab and directly convert plant material into high quality protein,” he said.