Not surprisingly, it arrived the northeast state of Assam, which shares a border with Tibet. Tibet has been dealing with ASF since July 2019, and at the time, ICAR’s Nagaland Centre had warned pig producers to stay alert to the virus spreading across the border.

Swaraj Rajkhowa, Acting Director of ICAR-National Research Centre on Pig, told Asian Agribiz that, as of May 28, close to 15,000 pigs had been culled or had died in Assam.

The virus has also spread to the neighboring state of Arunachal Pradesh. “We estimate close to 6000 pigs are dead here, but we have not confirmed this number,” said Dr Rajkhowa.

According to India’s official filings to the OIE, four villages in Arunachal Pradesh (456 cases) and seven in Assam (3743 cases) have reported outbreaks.

Early reports also reveal that the virus may have spread across the two states along the Brahmaputra River that runs through India’s northeast. Farmers along the river have reportedly thrown dead ASF-infected pigs into the river, which then washed ashore downstream.

“Yes, we had issues along the Brahmaputra River, but that practice has been stopped now. We are monitoring the area closely,” said Dr Rajkhowa. 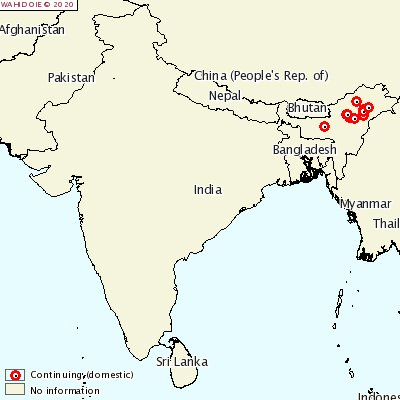 He also stressed that early interventions had partly contained the spread to a few districts so far, and ”reports of cases now are sporadic, we haven’t seen a major spread.”

The government had instructed all farmers to cull infected pigs and banned the movement of human and motor traffic within 1km of the epicenter. A 10-km radius from this has been marked as a surveillance zone, with pigs within this area tested for any sign of ASF. Pork movement in and out of the infected districts has also been banned.

The main testing laboratory in Bhopal has allowed the North Eastern Regional Disease Diagnostic Laboratory in Assam to also carry out ASF tests to support its activities. Dr Rajkhowa added that he had been discussing the possibility of bringing more testing kits into the area, to increase testing capacity.

The northeast has the highest per-capita pork consumption in India and has been supporting a fledgling pig industry. 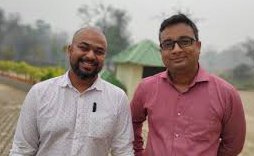 “In Assam, most of the farmers are smallholders and they do not maintain confinement as a practice, and hence there is a great possibility of the disease spreading,” they said.

Arohan Foods, which mostly sources pork from smallholders, has been working with the ICAR- National Research Centre on Pig and the Veterinary Department of Assam on ASF awareness programs for farmers.

Mr Hazarika explained that it is not easy to maintain strict biosecurity controls at the small farms where just 2 or 3 animals are raised.

“The relatively bigger farmers have 100 animals, on average, and they too fail to maintain biosecurity protocols,” he said, adding that his center has proposed that farmers maintain “double boundary/barrier systems” as a first measure to keep the virus from spreading to neighbors.

On the positive side, fewer resources also means lower overheads and capital lost when they are affected. “So they have the most flexibility to bounce back,” said Mr Hazarika.