Consumers want differentiation, practicality and the taste of duck meat, but they do not have time to cook from scratch. ARIEF FACHRUDIN and the Asian Agribiz team find out more.

Differentiation, convenience and availability are critical for duck processors in Thailand in developing ready-meals and pre-cooked snacks featuring the meat. These formats are becoming increasingly important as e-commerce comes into the mainstream.

“The lockdowns have significantly changed consumer behavior. Over 80% of consumers in Asia are buying food to eat or cook at home. Many of them are buying food online. This will drive growth in the sale of ready-meals with duck in the future,” said Anong Paijitprapapon, President of the National Food Institute.

Because of the nature of online food retail, it is necessary for ready meals and snacks not only to stand out in terms of taste and ingredients, but also in their packaging and presentation.

This includes duck processors who have been developing duck ready meals and snacks to suit changing consumer preferences.

This can be clearly seen in the development of Dalee Smoked Duck Sausage, launched recently by Bangkok Ranch, a major integrated duck processor, as the first duck sausage in Thailand.

Besides its attractive packaging and prominence within online retailers, Bangkok Ranch also tells consumers how its smoked duck sausage is different from anything else.

Duck kits combine duck meat with other items that can be easily prepared at home.

Duck meat is highly versatile. It can be matched with any number of carbohydrates and vegetables to create novel dishes. CP Foods has taken advantage of this versatility to develop ready meals based on duck meat. In Thailand, CP offers a range of roast and boiled duck meals that are served with noodles, rice and a variety of sauces.

Apart from this, CPF also offers duck meat lines combined with sauces and pasta that can be easily made at home. These products have been successful in international markets like New Zealand. 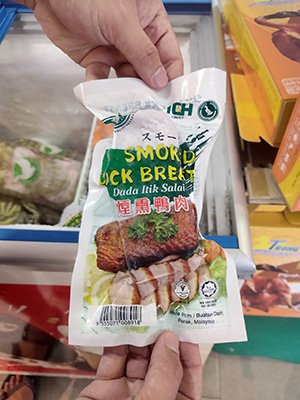 Cooked duck is popular in Malaysia and Singapore, where most of its consumers are of Chinese descent. Lately, there has been a move to offer duck in ready meals that target the halal market.

Most duck meat producers in both countries are already halal-certified, but growing interest in cooked duck has encouraged the development of more halal products.

TCH is a large exporter of live ducks to Singapore. Besides its own farms, TCH sources ducks from contract suppliers such as Trong Duck and Leisure Farms.

As one of Indonesia’s pioneers in ready-meals with duck, WBI Foods ventured into the category two years ago after finding modern retailers were only selling chilled and frozen carcasses. 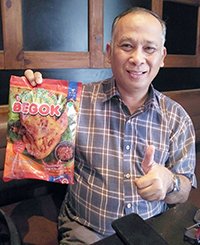 “I visited many supermarkets in Greater Jakarta, but their freezers were only filled with chicken and seafood ready meals,” said Rachmad Novyardi, General Manager of the integrated duck producer in East Java.

“We took it as an opportunity to diversify our business. Moreover, we learned that consumers, and especial millennials, now want practicality, convenience and tasty food.”

“We are targeting food stalls and reasonably-priced restaurants that want to sell duck dishes, but are limited on budget and cooking time. So, this is a solution,” he said.

In South Asia, duck is most popular in Bangladesh. Mostly grown by small and medium-size farmers, duck meat is considered a seasonal delicacy.

“The duck season starts in October and goes on up to February,” said Krishantha Wijesooriya, Bengal Meat’s General Manager for Production and Supply Chain.

As one of Bangladesh’s biggest meat processors, the company sells around 16-20 tons of duck meat in winter.

Given that it is a seasonal meat, Mr Wijesooriya told Asian Agribiz that most new lines are introduced during this time. Bengal Meat’s most popular ready-meals are duck curries in flavors such as Duck Bhuna and Duck Thai Curry. 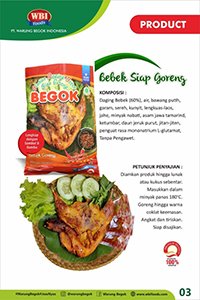 Begok whole duck is affordable and easy to serve.

Changing lifestyles and higher incomes have been driving demand for duck carcass and portioned cuts, but as yet, not ready meals and snacks with duck.

Unlike in other areas in Southeast Asia, duck meat is not so popular in the Philippines.Of the four main sub-sectors of the country’s poultry industry, duck meat contributes just 1% to meat volume and value.

As of end of last year, there were around 12.8 million ducks in the Philippines. The bulk of these are raised as layers, since duck eggs are more popular than duck meat.

The biggest market for duck meat is among Chinese restaurants. There are some local suppliers, but these are few and far between. One of the pioneers is Marine Agro-Ventures, based in Davao City in Mindanao. A fully integrated operation, it produces Peking duck and processes duck meat. Most of its production, however, is geared for the export market.

A more recent entrant to the market is EDL Farms, which is based in Tarlac Province in Luzon. This is also an integrated operation spanning DOC production to primary processing. Its target is mostly the domestic market.